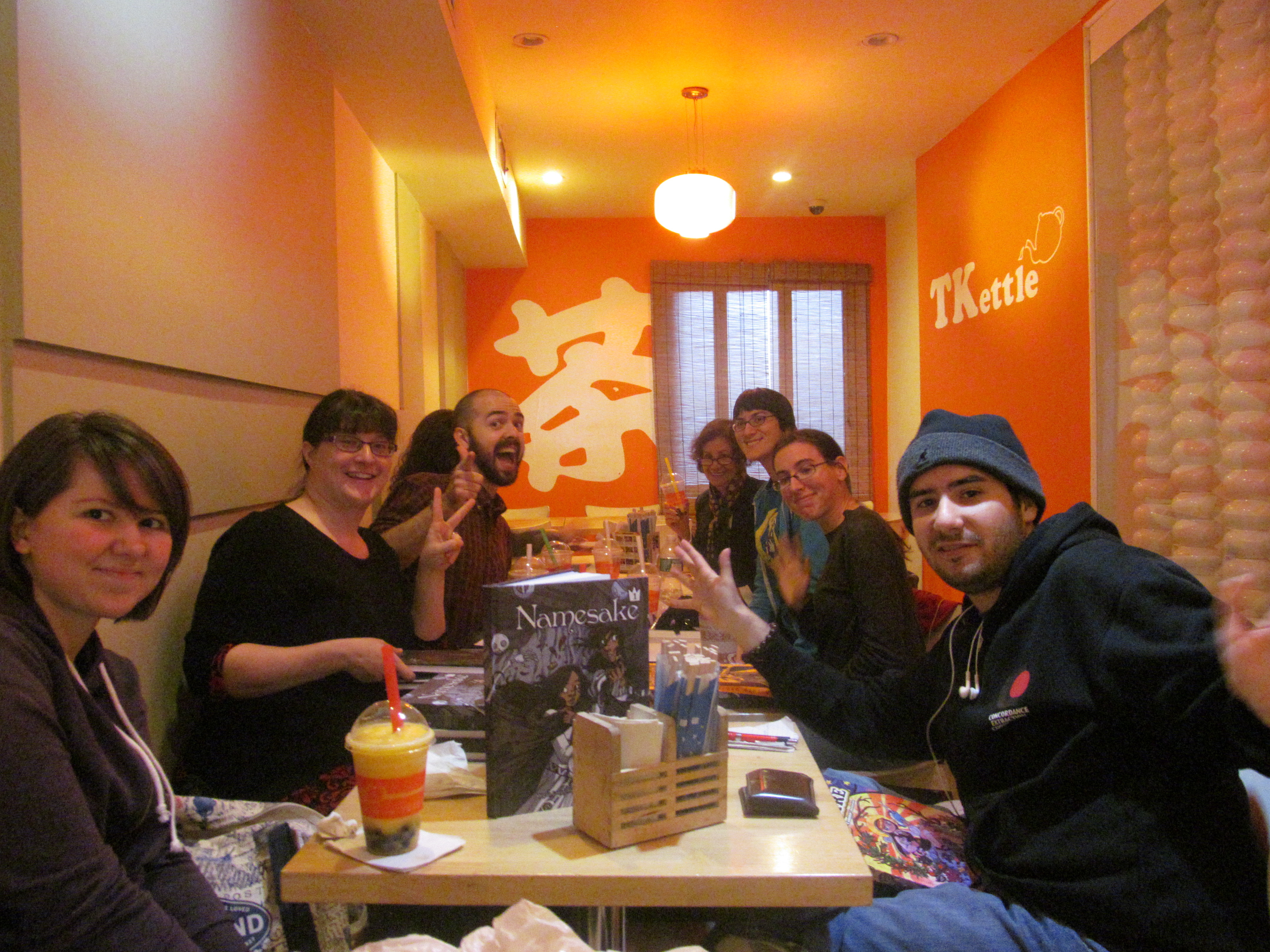 I've been busy at work on Choice of Pirate, my next game for Choice of Games, and the rewrites on Regaining Home, so there hasn't been much time to keep up on blogging. (Except, of course, on Questia, where I just got to write about Wonder Woman and the Bechdel Test, and Cengage Brain, where I wrote about the Beatles new bootleg track releases and Amazon's future drone delivery service. You won't find anything about what's going on with me over there, but I do get to write about interesting stuff!)

I was, however, on Twitter fairly regularly at the beginning of the month, promoting the (now over and unfunded) Kickstarter for Noble Beast's classics line, which will reappear in a different form next year. Since I am not frequently on Twitter, it was completely random that I caught this post by friend of the blog Seanan McGuire: 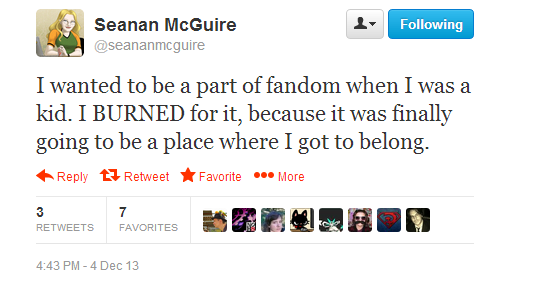 Seanan wrote about how, at Disneyland, you're going to see people of all shapes and sizes, but that while she craved being a part of fandom, much like Disney's Little Mermaid wanted to be with humans, "Then I got there, and people were nicer to me when I wore short shorts and tight shirts and pretended not to notice where their eyes went. Because yeah, maybe I sold my voice a little bit to be a part of that world, and maybe I thought it was worth it." Seanan is among SFF creators calling for fandom to be more accepting, particularly to women and People of Color. My social media circle is filled with people who are highly critical of the exclusionary feel of some areas of fandom, out of love for fandom and a desire to make us "better than we are," in Seanan's words.

I appreciate these crusaders, because I think they're improving fandom by making it more welcoming. Sometimes it seems easy to get bogged down in what's going wrong in fandom, though, so I thought I'd share some anecdotes of fandom experiences that got it right -- which are, possibly, due to the efforts of people like Seanan.

I was sitting with my family (my parents, Threestripe, and Bug) at Chili's, having dinner, when conversations from a nearby table caught my attention. Threestripe noticed, too -- we were hearing keywords like "Avengers" and "Korra" and I think even some gaming references. And after some subtle eavesdropping and glances to their table, we noticed that it was full of 20 somethings, mixed gender, size, race, and physical ability (one was in a wheelchair) who were all wearing My Little Pony gear. At least one was wearing a name badge on a lanyard. Threestripe and I had been to a gaming convention in that area a few years before, so when the group left, I caught them passing us on the way out.

"Sorry to interrupt," I started -- knowing that whenever you start like that you never actually are. "Are you guys with a convention?" A look of suspicion, so I quickly continued. "We just heard you talking our language."

Immediate understanding of acceptance, and we were met with grins. "Nope," said one, "just a bunch of geeks getting together to talk about ponies."

Bug, of course, loves My Little Ponies. She said so, and we agreed that all of us watched it. One of the young men joked, "You mean kids actually watch this show?"

A young woman asked Bug who her favorite pony was, and that day, Bug's answer was Pinkie Pie -- also the woman's favorite. So the young woman gave Bug a Pinkie barrett, just out of sweetness, and we talked about favorite Ponies moments while my parents watched with amused confusion.

This was one of those moments that I always look for among fans: that ability to connect, instantly, with total strangers, out of love for the same stories.

This second event was far more intentional than the first. Friend and fellow substrater Max Gladstone had a booksigning at Enigma Bookstore for Two Serpents Rise on November 9, 2013 -- the very same day that Megan Lavey-Heaton was in New York to deliver copies of the print editions of Namesake to Kickstarter backers (of which I was one). The universe aligned so that I could attend both -- and get together with a bunch of friends, all SFF fans and/or gamers, who live in the City for dinner.

It went about as wonderfully as it could have. The Namesake meetup was full of not only fans, but also creators -- Yamino of Sister Claire was there to meet with Kickstarter backers as well, as was James Carlisle Holder of Planet Oz, Alyssa Alecci of Lapse, and artist Luna/Sarah. I expected discussion about webcomics, but what surprised me was how many different geekdoms intersected: someone at one end of the table would start talking about Dr. Who, and someone at my end would get excited and involved in that conversation. Another conversation started up about Doc Ock as Spiderman, someone laughed that Fluttershy was her spirit animal, and when one person brought out their DS9 the whole table was suddenly full of them. We talked about cosplay, and one person talked about doing Crossplay as an expression of coming out as transgendered.

In a room full of strangers, we all connected as people.

Dinner with friends was wonderful and full of similar types of discussion -- as well as updates on family and friends and jobs -- before the majority of us headed out to Astoria for Max's signing. Max was one of a three member panel, which featured industry veteran (both as an editor and a writer) Laura Anne Gilman and debut YA novelist Hal Johnson, who also works at Midtown Comics. The conversation ranged from questions about the books in particular to the state of the industry, and authors and audience members (and the very cool booksellers at Enigma) all engaged in conversation in a style that reminded me of seminars back in college at Simon's Rock.

One of the things that impressed me about the event was the number of industry professionals in attendance, especially from Tor Books (Max's publisher). Moshe Feder, Brandon Sanderson's editor, told a great story about how as a kid, he bought his very first hardcover book by walking into the lobby of the publishing house and assuming he could buy it there. (He was twelve, and they found a copy and charged him full cover price.) It was a reminder of something that I know intellectually but forget sometimes: professionals in this industry are fans, too, and passionate about the works they love.

We don't get everything right in fandom. We've got a lot of work to do to make everyone who loves what we love feel included. But there are these great moments when we get it right, and those are worth celebrating.
Tags: max gladstone, personal, reading, seanan mcguire
Subscribe